OneDollarProductions.co.uk has had an overhaul! Now featuring ‘responsive web design’, which means it works on mobile phones. Yeah!

Check the new design out at www.onedollarproductions.co.uk and let me know if you find anything that broke or if you have any comments.

I got my Wacom graphics tablet back when I was running Windows XP, and apart from the driver occasionally announcing it’s not going to work without a restart it’s been great. When I switched to Windows 7 I found that there are a lot more built in pen and tablet ‘features’, for example a little ‘splash’ animation every time you press the pen down and a ring that appears when you right-click. When you mainly use the tablet for drawing this gets annoying very quickly.

Apparently Vista used to let you turn these features off, but the options are mysteriously missing in Windows 7*. With a little Google searching I figured out how to turn these features off, but every half a year or so they seem to resurface which is enough time for me to have forgotten how I did it. So I figured I’d document for future reference and for anyone else having the same issue.

To stop Windows treating a long press of the pen as a right-click:

You can also stop all of Windows’ tablet features (if you have the Wacom drivers installed you can safely do this and the pressure sensitivity, zoom ring etc will still work).

*I think on business versions you can use the local policy editor to turn them off, but that won’t work if you’re using a Windows Home Premium like me.

Despite starting work on our next Minecraft video 7 months ago (and promising it within the week 3 months ago) we only just finished it. Hopefully it was worth the wait, and you even get to hear what my voice sounds like. So without further ado: Nether Again

So far we’ve got nowhere near the number of views we got for The Yawning Dark, though it’s 100% liked. I guess we need to get it noticed up by some big website.

I’ve created a section for our Minecraft videos over on the Movies page.

Following my grand tradition of posting about things months after they were relevant, some friends and I made a couple of movies using Minecraft.

Our main piece was called “The Yawning Dark: A Minecraft Tale” and turned out to be fairly popular (over 13,000 views at time of writing).

And here’s the ‘pilot’ we made first to see if Minecraft videos were feasible.

Also I have another game almost nearly finished. That means I think it’ll be done in a week or two, but it’ll probably end up being done in a month or two. Anyway, stay tuned.

I really have to figure out how to make this blog wider. Can’t even fit Youtube videos in it.

Edit:
Updated my theme to something a bit wider. Still playing around with the colours, but it looks a lot better already.

I’d love to say there was a good reason for this, but there isn’t, so I won’t.

I’ve done a couple of comics over the last few months, but for some reason I never got around to adding them to the art page. Well now they’re there! As an added bonus you can now also see the first (and – so far – only) five episodes of Tommy’s Funhouse, the webcomic series I started way back before I had clever technology like graphics tablets.

The Perry Bible Fellowship webcomic unexpectedly updated this morning/late last night with this. Exciting stuff, because there’s been nothing new on there for ages. If you’re unfamiliar with PBF go and have a look at some of the comics on there. It’s pretty dark humour, but hilarious if you’re into that kind of thing. Nicholas Gurewitch is a great artist too.

I’ve had Sam and Max Hit the Road since probably around the time it came out, and I only discovered today that you can play it in black and white by pressing the ‘B’ key during play. Huh. 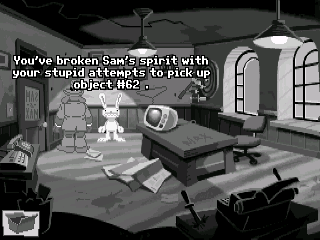 You can also turn on ‘dummy verb mode’ by pressing the ‘V’ key, which labels the actions in your inventory. If I recall the manual there’s also supposed to be built in screensavers, but I’ve yet to see them.

I’ve spent most of the last few days playing Heavy Rain on a borrowed PS3. It’s a brilliant game and much better than Fahrenheit (The Indigo Prophecy) which I played through for the first time in the last few months. The plot and set pieces are genuinely exciting and the eventual reveal of the killer is really well handled. Their identity is probably guessable too, though I didn’t figure it out, which is the sign of a well written detective story. Graphically it really shows off the power of the PS3, and the acting is really good for nearly all of the characters.

Unfortunately the overriding feeling I was left with at the end was anger. One of the selling points of Heavy Rain is that any of the characters can die and the game will still continue. In my case this meant I spent the better part of two days playing through the story, only for one of the characters to die literally 20 minutes from the end. It wasn’t even a ‘proper’ death. If you’ve played the game you’ll know the section and character, but basically during a fire I couldn’t see where I was supposed to be going or where I was standing, and thanks to the controls (which I hadn’t got used to even by the end of the game) I walked into the flames one too many times and burned to death. After two days of playing. David Cage’s story did it’s job and I got really involved with the world and the characters, and in the end I didn’t care whether Shaun Mars got saved, or whether the Origami Killer got caught or not, I just knew that one of main characters had died, that it was my fault and that (going by my ability at the game up to that point) I should have been able to stop it.

Of course you can load a chapter and replay from that point onwards, and see what would have happened if you’d done things differently, but it’s just not the same. The experience you get when you first play through a game is always going to be the one that sticks with you, especially with a game like Heavy Rain where you don’t replay sections or redo choices if you change your mind. At the moment I genuinely feel like the game was ruined for me 20 minutes from the end, and it was my fault.

I’m sure there’s a lesson in game design here, but figuring out exactly what isn’t easy. I don’t think Heavy Rain should have removed the ‘character dies – plot continues’ feature. Knowing that your characters are in genuine danger, knowing that if you mess up they will be removed, adds a lot more tension to the game. The problem is a big balancing act. If Nathan Drake goes charging into a squad of four heavily armed soldiers and attempts to take them out with his fists (which seems to be my brother’s method of playing Uncharted 2) it’s a life threatening situation, but it doesn’t carry a lot of risk because failure only means going back to the last save point, so you never feel too strongly about the decision or consequences. Put the save points further apart and suddenly the activity becomes much more exciting because the cost of failure is much higher. Heavy Rain is taking this to the extreme – all the dangerous sequences become much more thrilling because there’s literally the entire game riding on the outcome. Clearly this is good for immersion, but the cost is also huge.

This is an unusual thing in gaming. It’s not a regular game over of the “You died, load your last game?” kind – in those kind of games death is expected and a natural part of the game. It’s not the same as, say, a death sequence in an adventure game, because that’s a clear cut “You made a mistake, game’s over, go back in there and do it right next time” – your wrong turn is clearly labelled and your punishment is outside of the game world in that all it means is you don’t get to see the next section of the game. It’s also not the same as a traditional ‘bad ending’ because those tend to be replayability devices along the lines of “Well, you got to the end of the game but you didn’t do x, y and z, so why not go back and try and do them next time”. Heavy Rain says “You made these choices and these mistakes, and this is the consequence. Live with it”. I guess that’s a pretty mature take, but it’s pretty gutting when you’re on the wrong end of it.

I just spent the last 10 minutes trying to sign into the Rockstar Social Club in order to play GTA:IV, getting increasingly frustrated that not only did the series of logins and passwords I tried not work, but Rockstar was unable to email me password reminders. I finally figured out that because I’ve never played online I never created an account.

Once upon a time all you had to remember was your computer password and email account. Now I’ve got logins for websites, games, game distribution platforms, consoles (that I don’t even own) and several games publishers. With all the possible combinations of logins and passwords anything that gets shelved for a couple of months is doomed to have a password guessing/resetting session when it gets picked up again. A simple bout of amnesia would kill an entire online life.