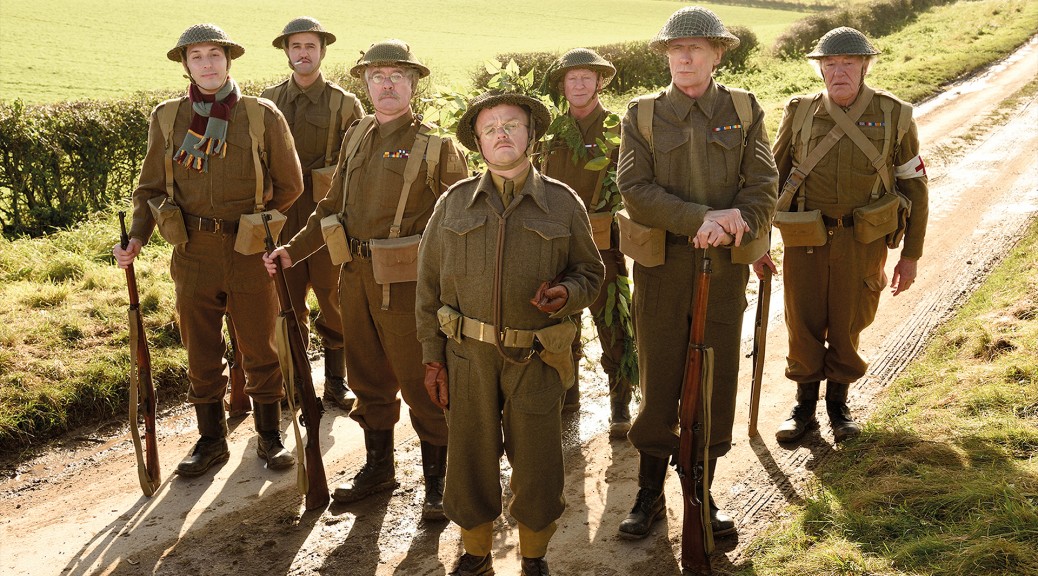 I wasn’t expecting a whole lot, but I was still disappointed. I’ve watched a lot of the TV series so I know the characters pretty well, but in this film they seem to be stripped back to maybe one or two facets. Captain Mainwaring is pompous. Jones is nervous. Pike acts like he’s in a film. Sergeant Wilson was the worst in my opinion. In the TV show he’s always polite and charming, but he uses that to get what he wants. He does a certain amount of plotting and scheming, using his social graces to try and convince other people. He’s also clearly in a serious, long-term relationship with Pike’s mother Mavis. In the film he just sort of bumbles about, bouncing between love interests and generally seems to have no idea what he’s doing or what he wants.

The plot is embarrassingly predictable and incredibly thin. A beautiful female reporter (Catherine Zeta-Jones) turns up out of nowhere and the entire platoon fall in love with her (out of character for some of them, but that doesn’t matter to this film). There’s also a German spy somewhere in Walmington-On-Sea. Can you guess where this is going?

The jokes too can often be seen a mile away, and mostly seem to have been scattered into the script as an afterthought. There’s one particular scene where Mainwaring, Wilson and Pike turn up at the reporter’s house (Mainwaring was invited, Pike thinks he was invited and Wilson… doesn’t actually have any reason to be there but is there anyway). As each successive character turns up the previous ones try to hide, with Pike’s mother turning up as the climax of the scene. But then she catches Pike and takes him away, and Wilson and Mainwaring see each other. And there are no consequences to any of this. The scene happens, isn’t very funny, then we move on to the next one.

The only positive thing I’d say was some of the actors were spot on. Michael Gambon was very well cast as Godfrey, but most of the enjoyment I got out of the film was from watching Toby Jones do a near perfect Arthur Lowe impression as Captain Mainwaring.

The strangest thing about the whole film though were the female characters. For a film called Dad’s Army, the women actually have quite major roles. I’m not against this, but there’s a weird side affect of making the entire platoon fall madly, irrationally in love with Catherine Zeta-Jones – all your male characters become incompetent idiots. You’re left looking for someone to cheer on, and alongside the men you’ve got a bunch of sensible, rational wives and girlfriends (led by Elizabeth Mainwaring who was always an off-screen character in the TV show) uncovering the mystery of the German spy and fighting to bring their stupid men back to them. I’d almost say there was some clumsy gender politics at work, but then the final shot is a freeze-frame of Catherine Zeta-Jones’ backside so I don’t know what to think anymore.

Not a good film.